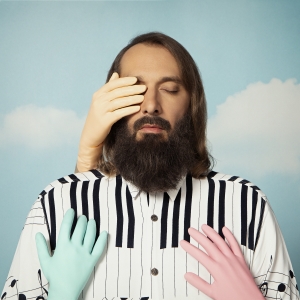 Format MP3 (8.99 €) Format CD (15.00 €) Format Vinyl (21.00 €) SHOP Checkout ({{cart.getNumItems()}} items, {{cart.bill.total_ttc | number:2}} €)
"Domesticated" is Sébastien Tellier's sixth studio album, his groundbreaking come back since "L'Aventura" in 2014. In his mind, he had only one ambition: gathering a fresh new guard of producers with the aim of crafting a new lush, futuristic pop sound, although still infused by his eternal and oh so special melodies. Mixed by the sound wizard Nk.F (celebrated for French rap duo PNL’s stunning sound), "Domesticated" will surprise you by its breadth and silkiness. Its topic, domestication, will speak to anybody delightfully familiar with the everyday domestic ballet of a household.
Mostly written at home, Sébastien allowed himself to be inspired by what he had in front of him: piles of plates stacked in the sink, dirty socks spread out on the scratched floor, two beautiful children he has yet to domesticate… or is it him now who is being domesticated?