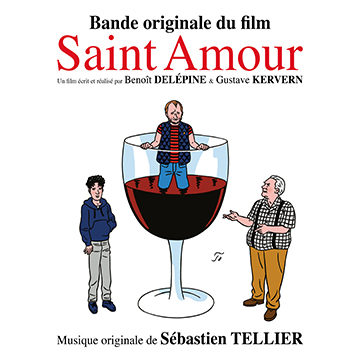 Format MP3 (2.99 €) SHOP Checkout ({{cart.getNumItems()}} items, {{cart.bill.total_ttc | number:2}} €)
Sebastien Tellier's music has always fused perfectly with images. Some directors have come to Sebastien for original scores such as Gilles Lellouche & Tristan Aurouet's "Narco" (2004), as well as being a part of the soundtrack to memorable moments: for Sofia Coppola's "Lost in Translation" (2003) in which Scarlett Johansson hangs around her room in Tokyo, and Daft Punk’s selection for the cult scene of "Electroma" (2006) in which the robots take off their masks in the bathrooms of a bar!

Sebastien Tellier has this time composed a score for "Saint Amour", a film by Gustave Kervern and Benoît Delépine, two acclaimed directors of new French cinema.
This typical French roadtrip flm tells the story of the adventure of a bibulous father (Gérard Depardieu), his son (Benoît Poelvoorde), and their taxi driver (Vincent Lacoste) as they look for love, against a background of agricultural decline.

Three extracts of this quirky and melancholic music are now available digitally...