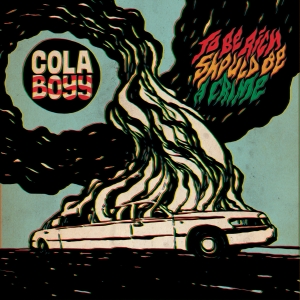 It's not the first time a song from another era finds greater resonance today, especially amid such troubled times. Jeb Loy Nichols' 2010 "To Be Rich Should Be a Crime" makes no exception as it was excavated by Cola Boyy early 2020, who found in that reggae tune and its anti-capitalist message the essence of his steadfast work as a militant fighting white supremacy and growing social inequalities in the USA.
With the help of producer John Carroll Kirby (Solange, Connan Mockasin, Sebastien Tellier, Frank Ocean...), and adding real strings thanks to his longtime partner and producer nit, Cola Boyy put a new spin and new words into it, so that "To Be Rich Should Be a Crime" becomes the true classic protest song it always deserved to be.

Cola Boyy adds: "Jeb's words are so honest and real, I think he really speaks in the language of the people, which is something to admire. We're truly living in a historical time. So many people are mobilizing, rattling the streets, fighting for Black Lives. I'm confident in the ability of the people to change this world with their fists and their minds. The big bosses are trembling. It's the perfect moment for songs like these.
I will be donating 50% of my Bandcamp proceeds to the @Ox_Arrest_FundsVenmo. Community members and activists who are organizing in Oxnard are facing legal fees after protesting against local slumlords and the police. They're brave as fuck and deserve all the support they can get. The other 50% of the proceeds will go towards the Help Austin #GeorgeFloyd Protesters Facing State RepressionGoFundMe. Protesters in Austin Texas are facing continuous repression. Leaders are being targeted and protesters are being brutalized by the police regularly. Following the murder of Garrett Foster by a fascist named Daniel Perry back in July, the police and their racist supporters have continued attempts at violently repressing the people fighting for Black Lives. These fighters need our support."

If you want to support: